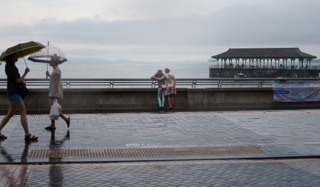 It was a rainy week in Hong Kong, but that didn’t seem to dampen the interest in the city elections on September 4. Everyone I met who lives in the city wanted to talk about the election of Occupy Central’s protest leader, Nathan Law Kwun-chung, to the Legislative Council. He is one of the few activists from the Umbrella Movement who has entered conventional politics. At 23, he lowers the average age of the ‘Legco’ by decades, and has promised to advocate issues relevant to young people, including transparency in university management and education and housing problems.

At the School of Journalism and Communication at the Chinese University of Hong Kong, where several teachers and 80 per cent of the master students are from Mainland China, discussion of the political situation is ongoing and lively. The election and the protests of two years ago came up frequently in the conversations I had during the day I spent on campus. According to my host, Prof. Joseph Chan, the topic of my lecture had attracted a larger number of students than usual, particularly for first week of term. I spoke on ‘Transnational Representations of Protest in the News’ and the students were clearly interested in how the events during the Occupy Central protests of 2014 were represented in global television news. I learned about other protests by Hong Kong students, including the vigil held each June 4, where thousands gather in a mobilization of the collective memory of the People’s Liberation Army’s attack on student protests in Tiananmen Square in Beijing on that date in 1989 (Lee, Francis LF & Chan, Joseph Man [2016] ‘Collective memory mobilization and Tiananmen commemoration in Hong Kong,’ Media, Culture & Society 38(7): 997-1014). My audience was fascinated by the short clips I showed of the ‘rooftopping’ protests from Al Jazeera’s web page, and asked to see the full documentary. 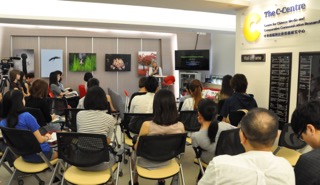 I came away with a far more nuanced view of the complexity of politics in Hong Kong. Afterwards, however, I realized that no one had actually revealed a personal political position on any of the issues we’d discussed. Part of the challenge of keeping Hong Kong ‘open’ involves keeping your own options open – to travel, visit, study and work in this exciting city as well as across the China Sea, visible through the large windows of department’s seminar room.

A week after my return to Stockholm, I learned of another umbrella protest, in 1896. A violent crowd was threatening Ghandhi as he led a procession through Durban in support of civil rights for Indian immigrants in South Africa. Jane Alexander, wife of the local police chief, opened her umbrella to shield Ghandhi, preventing him from being lynched by the angry crowd. Although far removed in time and place from Hong Kong’s Umbrella Movement, the resurrection of this incident in Folkoperan’s (The People’s Opera) performance of Philip Glass’ Satyagraha, made me more attentive to other histories of the umbrella as a symbol, both a shield and a weapon, in the ongoing struggle for human rights and self-determination.