This table shows the number of analysed headlines that were about protest or which contained a reference to protest. To be coded as a protest headline, a headline had to make reference to any type of manifestation of discontent (such as a mass demonstration on the streets of a capital, a workers’ strike or a prisoner’s hunger strike) and/or which included images of protesters.*

Several factors explain the variation in figures. Some have to do with ‘real world’ events: 2011 was the year that saw both the Arab Uprisings and the spread of the Occupy movement, for example. Other have more to do with media than with politics, and are thus more interesting, in terms of research results. Some channels – notably AJE and RT – consistently give more space and attention in their broadcasts to protest, albeit för presumably different reasons (documentation of which fall beyond the scope of the project) and deploying different frames and narratives (about which more can be read in the project anthology, see Outcomes pane). An additional factor is the different sampling methods used (daily broadcasts were coded for 2011, 2014-18 and Mondays only for 2008, 2009, 2012 and 2013) and occasional technical and scheduling disruptions.

*Protest is a shorthand here not just for gatherings where people say ‘no’ to something, but also manifestations when they take to the street to say ‘yes’ – for example, expressions of solidarity after the Charlie Hebdo attack or to signal that refugees are welcome. Protests can be mass or individual. Excluded from the coding and our results, however, are official protests, for example when a government recalls its ambassador in protest against a measure taken by another government. What we mean by protest can be seen in the table below taken from our project codebook. 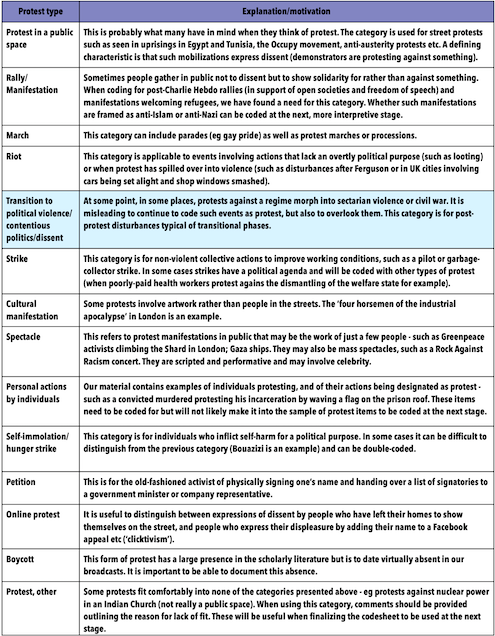