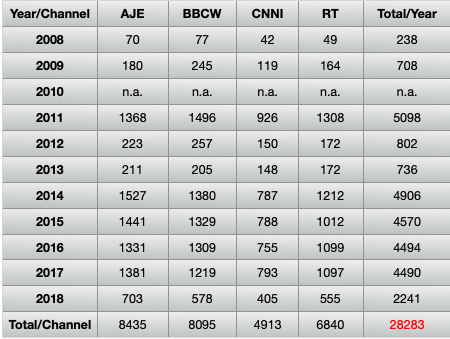 No fewer than 28 thousand headlines were coded during the funded period of the project. These proved easy to code quickly and with a high degree of inter-coder reliability, while at the same time providing good insights into the news values of the different outlets and one indicator of the importance ascribed to protest over the period of a decade.

The table that appears above shows the distribution of headlines across channel and year. The numbers are of particular importance for our findings as they provided the basis for the reporting of all the results in the project (share of protest, countries, speaking actors, frames, etc). Divergences in the numbers given in the table can be explained by a number of factors. The most relevant in this context are the different samples used for different years (Mondays in 2008-9, 2012-13 and daily broadcasts in other years), technical issues that led to missing recordings, and the fact – both interesting and frustrating when following the output of different newsrooms – that they have their idiosyncracies. Some broadcasts on some channels have more headlines than others (one newsreader might begin with five headlines before taking viewers to the top story; another might jump straight into the top story without preamble; more often, three headlines are read before viewers are welcomed to the broadcast), and some channels use a more consistent format throughout the decade (RT, for example) than others (like CNNI, which proved a particular challenge to study in a systematic fashion – a challenge that continues beyond the 2008-18 period).