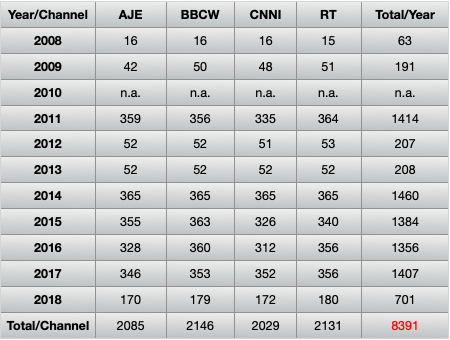 This table shows the number of broadcasts analysed in the course of the project’s funded period. (Coding has continued beyond this, into 2019 and 2020, and will continue up to 2022.) The divergence in figures between years is explained by the fact that different sampling methods were employed for practical reasons. For the years 2011, 2014-17 and the first 6 months of 2018, one broadcast each day by each of the four channels in focus was coded. The project takes as its starting point the financial crash of 2008, so coding for that year does not begin until September. The sample for the years 2009, 2012 and 2013 was comprised of one broadcast each week (Monday), instead of daily broadcasts. This day was selected because of the fact that many protests take place on weekends and that significant ones can be expected to impact when parliaments and governments reconvene on Monday mornings. Weekend broadcasts are themselves problematic to use on their own, given radically different lengths and formats, at least one some channels. Additional divergences are explained by technical problems encountered while capturing the broadcasts (not significant enough to affect the patterns emerging from the coding).