Many seasons have passed since the so-called ‘Arab Spring’. I was recently at a conference that provided an opportunity to think about the many forms of activism that erupted in those heady days, and the aftermath, as reflected on different screens. In Bahrain, residents set up roadblocks, ‘teskirats’, to stop police and military vehicles from moving through their neighborhoods. Ala’a Shehabi, Bahraini writer and economist, quickly realized that the teskirats were provocations, a form of grassroots protest with aesthetic overtones. Shehabi opened her presentation with a slide showing women arranging a line of vegetable boxes filled with rocks across their street, to hinder the patrols and register their opposition. People brought out what they had access to, rubble from the streets or old sofas and chairs from their homes, using domestic objects to erect barriers that became part of the battle of images during the uprising. Protesters found ways to mock police, for example, by placing a large teddy bear in one of the chairs. The roadblocks served a practical purpose, built high enough to hide behind during direct confrontations. But they also became gathering places for residents, and created new spaces for children to play. Bahrainis used roadblocks to reclaim their streets, as sites of political action and everyday life.

In another screening, Egyptian-Lebanese artist Lara Baladi presented excerpts from the transmedial archive she has created as a time-line of the 2011 Egyptian Revolution. Baladi’s ongoing collection is a bricollage of myths and events, using video, sound, images and new technologies in critiques, often humorous, occasionally outrageous and clearly feminist. As it grows, the archive becomes a means to feed back into the events that took place in Tahrir Square, then and now, and elsewhere. Baladi showed her work at the ‘Tahrir cinema,’ the open air screen that was erected in the square, and these screenings in turn generated new material for the archive. 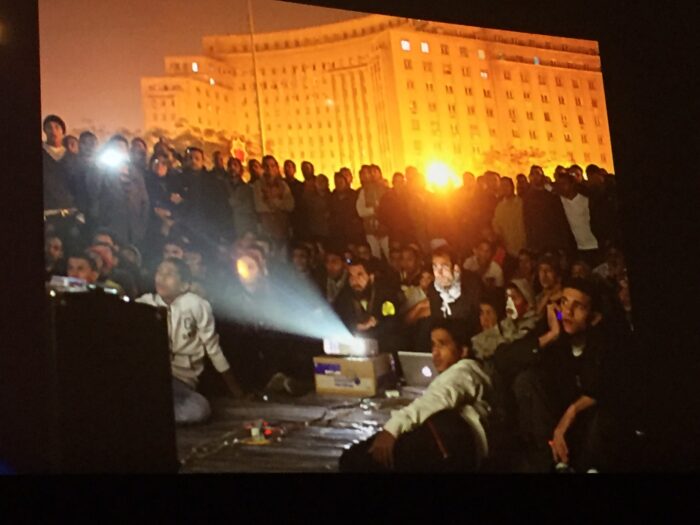 Over the past decade, the public screen has become a new venue where people gather to view events taking place elsewhere. More important, as these screenings at the ‘Tahrir cinema’ have demonstrated, the public screen brings the events ‘home.’ Watching the events together with others in a shared public space becomes a collective experience, with potential for social and political empowerment.