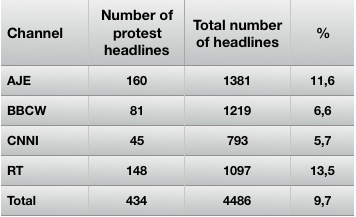 in ten headlines was related to protest in the daily news bulletins of the four channels the Screening Protest Project looks into. For a headline to qualify as protest headline, it had to include either a verbal reference by the anchor (key words were  protest, strike, mobilisation, riot, protesters, demonstrators, etc) or an image of a protest. In line with the results for other years in the sample, AJE and RT stand out with a share of protest in headlines almost double than that of BBCW and CNNI, respectively.

These results are based on 1407 daily news bulletins broadcast by AJE, BBCW, CNNI and RT during prime-time (in Sweden), divided as follows: AJE = 346, BBCW = 353, CNNI = 352, RT = 356. Due to technical issues, some of the recordings for 2017 could not be accessed, therefore the number of broadcasts coded for each channel is slightly different. At the same time, the format of the bulletins differ from channel to channel, which results in a different number of headlines for the same number of broadcasts.

Cite This:
Screening Protest — "Share of Protest in Headlines in 2017 by Channel," in The Screening Protest Project, May 6, 2019
http://screeningprotest.com/share-of-protest-in-headlines-in-2017-by-channel/