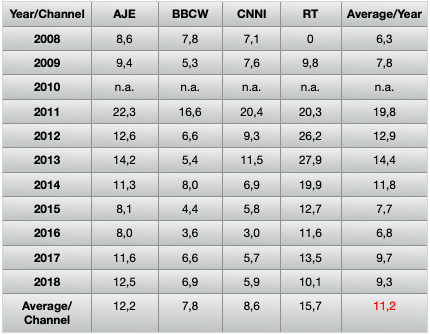 Just over 1 in 10 headlines, in the decade studied by the project team, had to do with protest. The headlines thus provided useful signals as to which manifestations to analyse more closely. They were, of course, only one consideration guiding the study. Theoretical as well as empirical considerations are set out in the Screening Protest anthology.

The numbers in this table represent the share of protest per year and channel across the 10-year period of the study. They are based on the total number of analysed headlines and the number of protest headlines. They provide the basis for numerous, more in-depth probing and nuanced discussions of similarities and differences, both between years and between channels. But two findings in particular – one related to years, the other to channels – are worth mentioning here.

The year that saw both the so-called ‘Arab Spring’ and the Occupy mobilisations that began with Wall Street and spread to other streets, cities, and countries – 2011 – stands out. Compare with the other years we studied, protest news in 2011 received most attention, with 1 in 5 headlines related to protest.

When it comes to channels, the we found a consistently high presence of protest in the broadcasts of two channels – those of AJE and RT – in a way that distinguished them from BBCW and CNNI. These and differences in the frame and narratives deployed by the different channels – the ways that the same protest events were used to tell stories about civil courage, civil disobedience, global solidarity or oppressive states – are explored in the Screening Protest anthology, conference papers and other outcomes and in ongoing research.