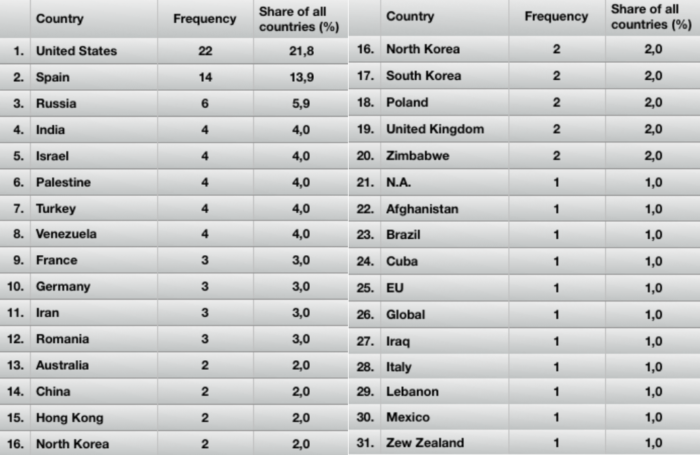 In BBCW, the US is the most frequently named country when covering a protest story in the headlines. The US is followed at a considerably big distance by Spain, which saw manifestations both pro and against Catalonia’s independence for several months. The podium is completed by Russia.

Methodologically, three points should be made here and these are 1. The frequency of all countries appearing in a protest-related headlines was accounted for, which means that protest does not necessarily took place in all of these countries or to the extent displayed in this table; 2. When coding for countries, several ‘entities’, such as EU and Global, were added in order to capture as accurately as possible the news content; and 3. The percentages displayed in the table are based on the total number of occurrences of each country (in this case, n=101).

Cite This:
Screening Protest — "Share of Countries Appearing in Protest Headlines in the Daily Broadcasts of BBCW 2017," in The Screening Protest Project, May 6, 2019
http://screeningprotest.com/share-of-countries-appearing-in-protest-headlines-in-the-daily-broadcasts-of-bbcw-2017/