Intertextuality and interaction in representations of protest then and now

Over the last few weeks I’ve been exploring intertextuality in the representations of protesting workers in newsreels and actualities of early film. This means that I have been asking questions such as where do these ways of representing come from, do they have a history, or were they just coincidental?

To give an example I would like to share these two images. One is an illustration of a Mayday parade of 1890 – the first held in Stockholm – was published in an illustrated Swedish magazine called Svea. The other is a frame from a newsreel documenting a Mayday parade in Uppsala in 1914, produced by Swedish Biograph. In spite of their differences, to me, there arguably is an interesting resemblance between these two images. Both depict a speaker on a podium in the background, and the backs of the by standing audience in the foreground. There is intertextuality at work, it could be argued, suggesting a form of intermediality between early cinema and the illustrated press. It could also be coincidence. The methodological issue is, of course more complicated: sources will have to be consulted before either argument can be made. But even at this preliminary stage, it is a reminder of the need for caution so that technological change is not confused with cultural and/or social change. 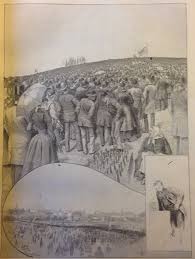 If we instead focus on the differences between these two images, such as the proximity to the audience and in particular the faces of the people in the crowd who look back at the camera, things become even more complicated. The camera operator could have chosen to take the shot from a greater distance so as not to be noticed by the people in the crowd. That may not have been possible, or there may have been an intent to interact in order to capture movement. Of course an illustration could just as easily have included a face, but in this case the camera operator arguably invites a form of interaction – dare I say participation? – which seems specific to the medium and makes it difficult to rule out the role of technology in the process of representation.
These images and reflections are glimpses of an analysis that is still work in progress. But even at this preliminary stage, it seems to me that making comparisons such as these confronts us with an important question about the extent to which we can understand the history of protest representation on the screen in terms of differences and similarities, and to what extent we dare to speak about continuity and/or change.