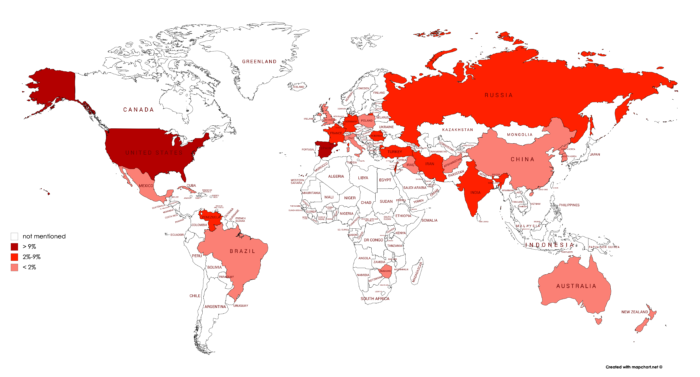 By counting all the countries that appeared in the protest headlines of each channel and by quantifying the frequency of their appearance, the Screening Protest Project has created different ‘maps of protest’ as drawn by each broadcaster. The above map shows all the countries that appeared in BBCW’s protest headlines in 2017. In the 353 BBCW daily broadcasts* analyzed for 2017, the SP team identified 81 headlines that mentioned and/or showed protest.

This map includes not only the countries where protests took place but all the countries that were mentioned by the anchor in a headline about protest (thus, presented as connected one way or another to the protest in focus). At the same time, not all countries appeared equally frequently in the protest headlines, and this difference is marked on the map through different shades of red, in this case (the colour assigned to BBCW).

*Due to technical reasons, some of the BBCW recordings from 2017 were unavailable.